Saturday August 22: 18 miles + 5 miles
I pushed off from my house with a fully loaded bike.  Heading north, I took my usual commute route down MLK, Jr Way, over the Montlake Bridge, to the Burke Gilman trail. However, this time I peeled left up to Ravenna park, crossed the ped/bike only bridge and a few blocks more uphill to Irena's house. I was pushing the clock. We had a ferry to catch. As soon as I arrived, we threw my bike and bags into her car and took off for Anacortes.

Smoke hung in the air in the Skagit Valley from the Eastern Washington fires so that all we saw of the morning sun was a firey orange dot in the haze. 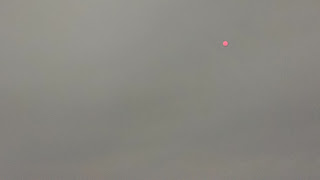 Crossing onto Fidalgo Island the skies cleared somewhat and we found parking for $6/day just up from the ferry terminal. I was racing the clock again to scribble plate numbers, return dates, and such on the payment envelope as I heard the announcement to load the 10:20 ferry. We pedaled down to the toll gate, as I've done for the Bainbridge Ferry, only to be told to go to the foot passenger area. Cars were loading, and we were still buying tickets! But we made it!

The morning ferry was loaded with youngsters. Children heading to YMCA Camp Orkila filled the passenger area, and responded WHALE to the loud O R C A shouted by the ferry staff to get their attention. They munched early lunches and talked with one another. Of course, I recognized a few former students. One boy was going to be 7th grade. Another girl (a junior in high school), now a CIT. And a third, a junior in college, a full counselor! Thank you Y camps for this teaching and learning legacy. 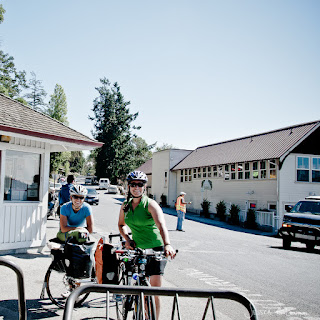 We pedaled off onto Orcas Island. I was last there ten year ago, for my sisters wedding, when then, too, I pedaled. This time, I had a company, and no agenda for the weekend trip. Orcas is hilly. Within a few miles, Irena had a few issues with her bike, but we got rolling within no time. 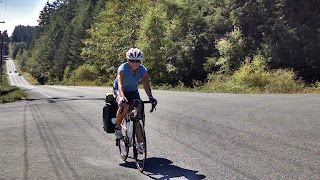 As we rolled around the west side of the horseshoe, we saw life at a slower pace. There are no traffic lights on Orcas! I spotted this kinetic sculpture on the side of the road. 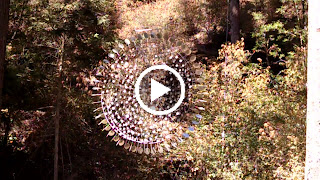 This is one of the reasons I love the bike--you go slow, look around, and are in awe.

Bike + island time + little details = perfect lunch.
Irena packed a delightful picnic. Baguette (on the back of a bike), a wheel of cheese, fig spread, and awesome new must haves FLASQ --a 300ml aluminum bottle of wine. "It's the little details," she smiled unfolding the checkered dish towel as a table cloth. I'm grateful for details and thoughtful friends. 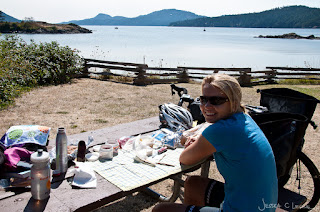 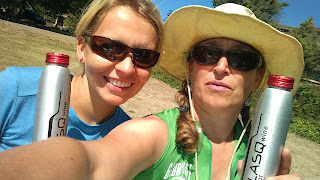 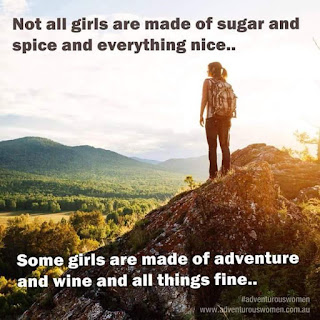 We wandered East Sound, the main town on Orcas a bit--chatting with the visitor center lady with the maps, checking out the farmers market crafts, sampling the delicious ice cream sandwiches, and talking with other folks. "Are you the pannier girls? We saw you along the road. Great work."

Continuing out of town towards Moran State Park we cranked mostly uphill. I had trouble keeping momentum because when I passed this museum with beautiful art on the walls and even pavement it required a photo stop. 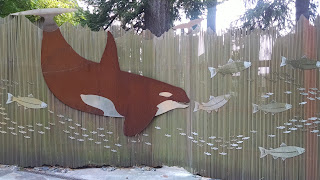 But the long grind continued to the crest of the hill. We descended to the park entrance, and pulled up to the entrance booth, and got a spot at the primitive camping area. Another reason to love the bike= no ferry lines, and no campground reservations needed. The lady seemed to be topographically challenged when she said, "It's mostly downhill." It was to the lake, and then flat along the lake, and then uphill to the campground.

Campsites with pit toilets, potable water, and a picnic table are hardly primitive. The dry grass and tall trees made for a wonderful camp site to set camp. 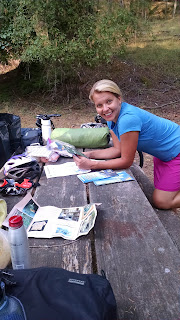 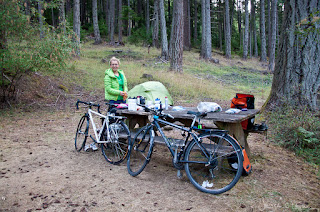 Even with good company and snacks and such, Irena decided we couldn't hang in camp the rest of the night. So we changed clothes and rode the narrow curvy downhill road to Rosario Resort, where my sister was married almost exactly ten years earlier. [photo] It was nice to remember the time there with my mom, the conversation chairs, a schooner family adventure, and having drinks out back with my aunt and uncle.

I wanted to have drinks outside now, too. So we went down to the Cascade Bay Bar and Grill for drinks, oysters, and then we decided that a proper dinner (fish tacos for I and calamari tacos for me) was better than freeze dried back at camp! On our way out we ran into Susan M and her husband Keith. "These are some of the book club ladies," she boasted to her husband. Irena and I had just been talking about this unique and wonderful group. It was nice to hear another member vocalize the same joy!

Up the seriously steep hill in the dusk, a doe and her two fawns crossed the road at the crux, allowing me to pause to take a gander. We seemed to have impeccable timing today, as we rolled back into the park for a "leg dip" and refresher in the lake. 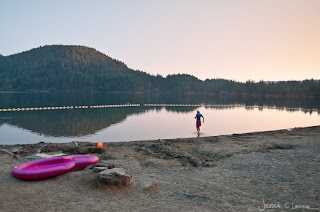 Irena's headlights streaked across the camera. 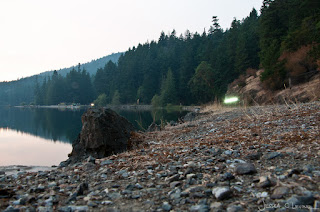 Inflatable solar LED, the last of the wine, and the chocolate made for an even warmer evening, pouring over maps and making plans for Sunday. 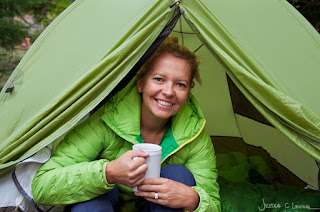 Scrambled eggs and zucchini bread for breakfast, plus oatmeal (pack it in!) and we we ready to roll. Determined to earn a summit together this summer, Irena lead us up Mt. Constitution. In the turn out to check his breaks, I met a 73 year old who lived in Olga biking on down. He gave me a bit of beta, about the lookout, the false summit and the rolling ridge finish. Indeed, Irena was quite ahead of me. I caught her on the false summit, where we began to sing that ole Salt and Peppa cheer song, Push it Good. And then, we were on the summit. We did a silly celebratory photo shoot. 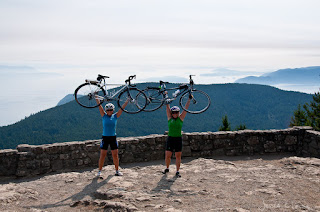 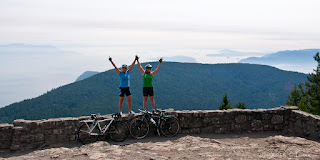 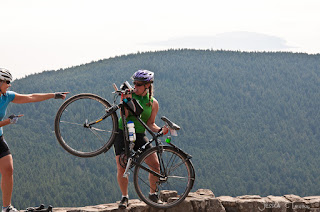 We flew down the mountain, stopping once to check our breaks. Irena's were so hot she couldn't touch them. My rims were really warm. We lunched on hummus and carrots, the rest of the baguette and delicious almond butter. We packed up and headed out of the park. The long uphill from yesterday turned into a delightful descent, standing in my pedals, and smiling. We wandered around the back of East Sound, past the airport, and then out to West Beach on Enchanted Forest Road. At an intersection we paused to decide what was next. That's when I heard it. A little, "do you know where you are?" sound from the other side of two fences. A garden gnome, so to speak. The real human was actually in the garden, and giving us advice, and sitting next to him was a real ceramic garden gnome. funny. His advice was that the ice cream at West Beach was expensive, but it was so delicious. We continued on, now on Crow Valley Road, descending along Turtleback Mountain Preserve. I turned my head back a quick second and saw it! The Orcas Island Winery sign. We stopped, backed up the hill and went in for a tasting. Check. Into West Sound, which reminded me so much of a small town in Norway--the harbor, the boats, the salty air. I hadn't been up to the San Juan islands since 2010, and now everything with mountainsforestocean reminds me of Norway. We made it to the 5:15 ferry and both boarded, although would disembark separately. Irena continued on to Anacortes and for home. I hung on Shaw Island for a few hours waiting for a Westbound ferry to come around to take me to Friday Harbor on San Juan Island. I biked to a county park on Shaw with white sand beaches just 1.5 miles from the ferry dock. 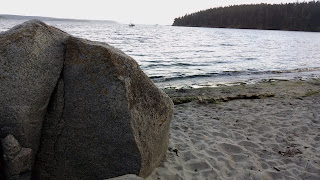 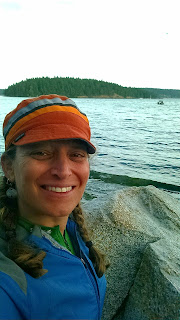 And then I got to enjoy magic hour back at the terminal and then on the boat. 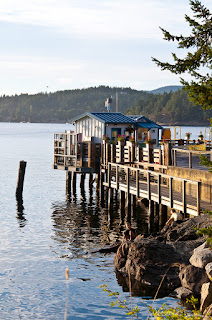 In the dusk I biked to where Teresa and Christof are staying for two weeks.

Posted by jclseattle at 2:22 PM